Welcome to the latest episode of The Rebel Beat! Class war on the dancefloor, delivered to you once a month, in a podcast. 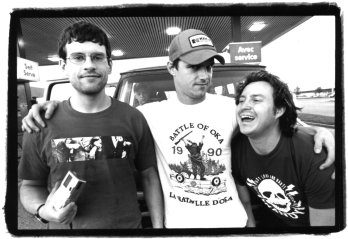 Our special guest on the show this month is Jord Samolesky, drummer and founding member of Propagandhi! We spoke with Jord while he was in Montreal touring the band’s new album “Victory Lap”. We spoke about the history of the band, the state of the world, and most importantly, hockey!

Finally, in our Turn it Up segment, we give another shout out to Lido Pimienta for carving out positive spaces for women of colour in the music scene. Read more about that here.

***Support The Rebel Beat!***
Sign up on our Patreon page for as little as $1/month, and get some great swag!
www.patreon.com/rebelbeatradio

Talib Kweli – All of us

Propagandhi – And we thought nation-states were a bad idea

Check out the video for “Omar” by Ryan Harvey, Kareem, and Shireen!

American elections got you down? Then it sounds like you need a good dose of revolutionary music! Never fear, because we’re back with the latest edition of The Rebel Beat, a Firebrand Records podcast!

Our special guest on the show this week is the raging Scotish anarcho-punk
band Oi Polloi! They’ve been churning out 100% anti-fascist street-crust since 1981, and they show no signs of slowing down. Aaron caught up with them while they were in Montreal for Revolution Fest, and we’ll hear an in-depth conversation on everything from Brexit and Scotish independence, to protecting Gaelic and other Indigenous languages, to BASHING THE FASH! END_OF_DOCUMENT_TOKEN_TO_BE_REPLACED

Hello! And welcome back to another weekly podcast of The Rebel Beat!

We start off with a big announcement this week. As of May 11th, The Rebel Beat will actually no longer be a weekly show. Yeah… I know! Sad, right? But here’s why:

I (Aaron) have been doing a weekly radio show at the mighty CKUT radio every Wednesday night now for over 10 years! The podcasts that you hear here are LIVE radio. I’ve loved getting my anarchist butt into the CKUT studio once a week for the last 10 years to bring this show to our devoted local listenership on the FM, as well as all of you who visit our website or subscribe to the podcast.

But like so many good things, nothing lasts forever. Cliché, but kinda true. I’m retiring from the show in its weekly format,  BUT, we will be continuing it as a less-regular podcast. It will still be awesome. It will still be revolutionary. We’ll still strive to bring you interviews with mind-blowing radical artists. And yes, from time to time, we’ll even bring The Stimulator back into studio for some trouble-making.

So, if you haven’t already done so, MAKE SURE YOU SUBSCRIBE TO OUR PODCAST!

You can get it on iTunes here, via Stitcher here, or on any of your other favourite podcast platforms here. END_OF_DOCUMENT_TOKEN_TO_BE_REPLACED

Welcome back to another weekly podcast of The Rebel Beat! This week on the show, we start off with some ideal tracks that we’d love to have blaring over a loudspeaker during a riot, and then we went into a musical obituary for Vi Subversa. Vi Subversa was the lead singer of the UK anarcho-punk band Poison Girls, and she sadly passed away last week at the age of 80. Rest in power! END_OF_DOCUMENT_TOKEN_TO_BE_REPLACED

Hi! Welcome back to another weekly podcast of The Rebel Beat!

It almost feels like way too long, but this week we’ve got our regular collaborator Frank from Submedia.TV back in studio with us. Since November 29th is the International Day of Solidarity with the Palestinian People, we took the opportunity to highlight the amazing liberation movement in occupied Palestine, the global Boycott, Divestment, and Sanctions (BDS) movement, and play some music by artists who ha

ve heeded the call to boycott Israeli apartheid. As an inspiring example, in Montreal in 2010,  500 artists signed an open statement pledging their support for Palestine. END_OF_DOCUMENT_TOKEN_TO_BE_REPLACED

In anticipation and celebration of the bookfair, we bring you 2 hours of anarchist rebel music on this podcast of The Rebel Beat, featuring songs spanning different decades, continents, and genres. Hope you enjoy! END_OF_DOCUMENT_TOKEN_TO_BE_REPLACED