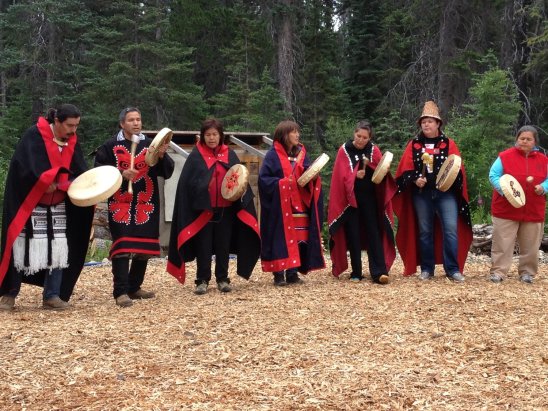 Happy new year! And welcome back to another edition of The Rebel Beat. On this edition, I wanted to share a radio program I guest-hosted on CKUT radio in Montreal, Funky Revolutions. What you’re about to hear is a 2 hour music mix of funky soul, hip-hop, reggae, and folk, with a special focus on the struggle against pipelines on Wet’suwet’en territory.

We’re joined by Jennifer Wickam (35:00), a Wet’suwet’en land defender who has been holding it down at the Gidimden checkpoint. The tension has been high over the last few weeks as RCMP police are poised to attack the community yet again.

A Tribe Called Quest – Left my wallet in El Segundo

Otis Redding – The glory of love

Natural Sympathies is the solo project of the talented & visionary artist Amber Goodwyn. It is synth-pop with deep hooks and layering, powerful lyrics, and a very danceable live show. Amber is a musician, a mother, a community radio programmer, and a feminist. She joins us on this episode of the Rebel Beat all the way from Regina, Saskatchewan to talk about the intersection of all these things. Look out for her new album “Porous” on the way this fall from Grey Records.

If you like this podcast, then support us! www.patreon.com/rebelbeatradio

Sons of Kemet – In the castle of my skin 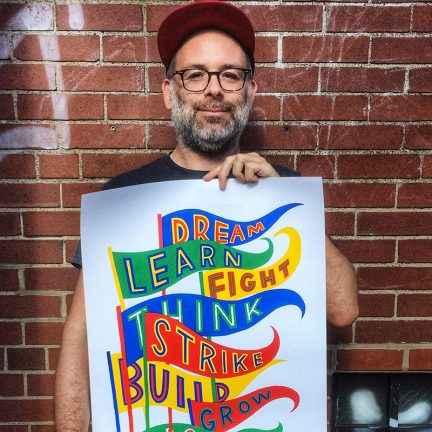 Josh MacPhee does beautiful art. He is a member of the Justseeds collective, and if you love their work, you might have some of his prints up on your wall. In recent years, Josh has turned his focus from visual art and graphic design to revolutionary music, and he is the author of the forthcoming book “An Encyclopedia of Political Record Labels” from Common Notions Press. The book is a glorious work of deep research and stunning design. He joins us on the Rebel Beat to dive deep into his book, and the propaganda potential of record labels. 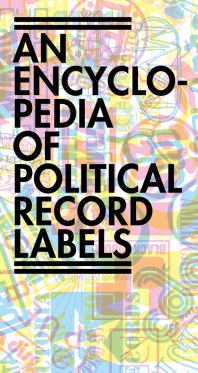 The book is out in October 2019, and you can pre-order your copy here!

If you like this podcast, then support us! You can sign up as a monthly sustainer on our Patreon page (get some great swag too!), or make a one time donation of any amount by sending $$ via Paypal to rebel@ckut.ca.

In our Turn It Up segment, we give a nod to Egyptian rebel musician Ramy Essam, who is fighting to get many of his band-mates and artistic collaborators out of jail. Find out all about the campaign around his song “Balaha” here.

Welcome back to another episode of The Rebel Beat! This episode is reminiscent of the old format of this show, 2 hours of live radio, done at our beloved CKUT radio in Montreal during a residency Aaron was doing for the Montreal Sessions.

Our special guest on the program is one of Egypt’s top studio guitarists and rebel musicians, Weka Soliman. You’ll definitely be hearing more about Weka’s story in the weeks to come on this show, but for now, enjoy this episode as he guides us through Egypt’s vast world of underground music.

*** If you like this podcast, then support us! www.patreon.com/rebelbeatradio 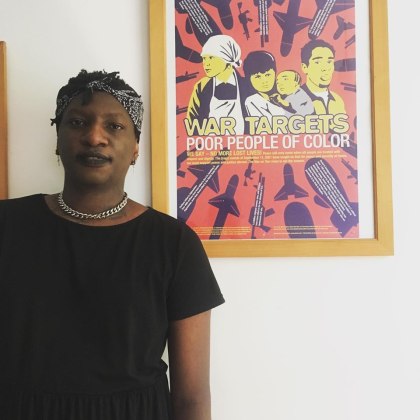 ** Do you like this podcast? Then support us on Patreon! https://www.patreon.com/rebelbeatradio

After a prolonged hiatus for most of 2019, we’re back with a brand new episode of The Rebel Beat! This one is a bit of a throwback to our old format, since it’s part of a residency we’re doing at our beloved local community radio station CKUT. So you’ll hear a lot more music here!

Special guest on the show is the delightfully militant trans rapper Backxwash. Originally from Zambia, she’s now based in Montreal. She’s been tearing up the local scene lately, from playing huge stages like Montreal’s Pride festival, to countless community benefit shows. And her new album “Deviancy” is fire!

Backxwash – Devil in a moshpit

Backxwash – Don’t come to the woods

Backxwash – Burn me at the stake

Jackie Shane – Any other way

Femmpire – Eyes of the patriarchy

Against Me! – Transgender dysphoria blues

This is our last episode of the Rebel Beat for 2018, and we have some big news about the podcast as we head into 2019. Ryan Harvey of Firebrand records joins us to talk about that news, plus some of his favorite music of the year, and what it means to be a working-class musician at the dawn of 2019.

We give a special shout out to the Unist’ot’en Camp, who are on high alert as they fight a court injunction to force a pipeline through their Indigenous territory. Support them and get informed here!

What’s up! Welcome to the latest edition of The Rebel Beat for November 2018! Our special guest on the show this month is Xiuhtezcatl! Xiuhtezcatl is maybe the busiest, fiercest, and most accomplished 18-year old we’ve ever spoken with. He’s an Indigenous hip-hop artist based out of Boulder, Colorado, a youth activist, and he’s even written a book on resisting climate change. A huge inspiration dropping beats that the next 7 generations can revolt to.

**If you like this podcast, then support us! http://www.patreon.com/rebelbeatradio

In our Turn It Up segment, we give mad respect to Benjamin Zephaniah, a British dub poet who recently turned down an offer to be the UK’s poet laureate. Check out the article, and Zephaniah’s righteous response here.

Benjamin Zephaniah – I am a revolutionary

We interrupt our regular programming to bring you another episode of Changing On The Fly, Aaron’s other podcast, that we think you’re gonna love. Check it!

We’re joined on this episode by Mark Bray, history professor & the author of “Antifa: The Anti-Fascist Handbook” to talk about Gritty, hockey, and what the antifa movement actually is. Since we’re talking about Pennsylvania and fascism, we also reflect on the recent tragic synagogue shooting in Pittsburgh, and pay our respects to the victims. May their memories be for a blessing.

Oi! Oi! Vey!
Welcome to the latest episode of The Rebel Beat!

Straight outta the ranks of Montreal’s Wobblies, we’ve got an interview with The Union Thugs. The Union Thugs are a folk-punk band who take a page from the little red song book, and give a nod to the great working class music heroes like Woody Guthrie and Billy Bragg. The Union Thugs feel most at home playing on today’s picket lines, using their bodies and their instruments to clog the wheels of capitalism. Bosses, beware!

If you like The Rebel Beat, support us!
www.patreon.com/rebelbeatradio

On our Turn It Up segment, we give a shout-out to Rihanna, who refused an offer to play at the 2019 Super Bowl in solidarity with Colin Kaepernick.
bit.ly/2ExbE2R

Oh, and a huge solidarity shout-out to the Canadian Union of Postal Workers, who are on strike this week! Up the posties!!

Hey Rebel Beat listeners! We interrupt our regular programming to bring you something special – the very first episode of Changing On The Fly, Aaron’s new podcast on hockey and radical politics!

If you want to follow along with all future episodes, subscribe to Changing On The Fly now wherever you get your podcasts (Apple, Spotify, Stitcher, Google Play, etc.)

If you enjoy Changing On The Fly, and want to support it, head over here to our Patreon page!

On this episode, we lace up the skates and hit the ice to talk about colonialism in hockey, and the Indigenous hockey experience. What does it mean to call hockey “Canada’s game” while Canada is a country built on stolen Native land? We’re gonna take a deep dive into hockey’s role in Canada’s residential schools, the presence of Native mascots in sports, and the changing role of Indigenous hockey players in the NHL today.

To help us pick apart these huge questions, we hear from:

-Braden Te Hiwi. Te Hiwi is an Indigenous Maori academic, originally from New Zealand, who now teaches as an assistant professor in the Department of Kinesiology at Lakehead University in Thunder Bay, ON. He co-authored an incredible paper on the history of hockey at the Pelican Lake Residential School in northern Ontario:
www.utpjournals.press/doi/abs/10.313…jh.ach.52.1.04

-Justin Louis is from the Samson Cree Nation of Mascwacis, Alberta, and the co-founder of Section 35, an Indigenous clothing company. Louis and Section 35 have put out a line of clothing called “Kill Mascots”, which takes aim at racist Native mascotry in sports (particularly the Chicago Blackhawks):
www.sectionthirtyfive.com/

-Jason Brennan is the producer and director of Hit the Ice, a show on the Aboriginal Peoples’ Television Nework (APTN) that follows the lives of young Indigenous hockey players. The show is now in its 6th season!
www.hittheice.tv/

To read the Calls to Action on sports from the Truth And Reconciliation Report, visit:
www.trc.ca/websites/trcinstitu…Action_English2.pdf

For more information on Changing on the Fly, or to subscribe to the podcast:
ChangingOnTheFlyPodcast.Wordpress.com

Music in this episode is by The Kendallz, DJ Spooky, A Tribe Called Red, and Ilegot.