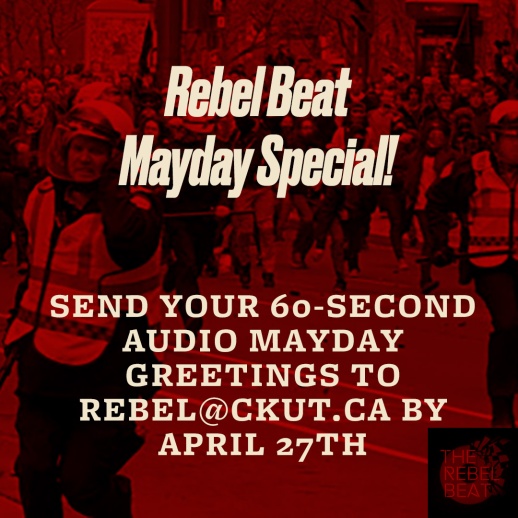 This year we’re putting together another special Mayday episode of The Rebel Beat podcast. As in past years, we’re hoping to compile a bunch of audio recorded Mayday greetings from listeners around the world. We’re really hoping to give some much-needed Mayday inspiration in a really hard year for the world. PLUS, our MayDay special will also be our 100th episode – even more reason to celebrate!
Do you think you could send us a 60-90 second recorded Mayday greeting by Monday, April 27?
You can get creative with it, but basically, just your name, location, why Mayday is important to you, and then your Mayday song (if you have one). Your greeting can end with “My Mayday song is….”. Don’t worry about downloading or sending us the song file – as long as we can find it on Youtube, we’ll download it (but emailing a link won’t hurt).
You can record the audio on your phone, computer, USB mic, reel to reel, whatevs, and send it in any audio format. By email, you can send it to rebel [at] ckut.ca.
Thanks for considering this, and really hoping you can be part of it!