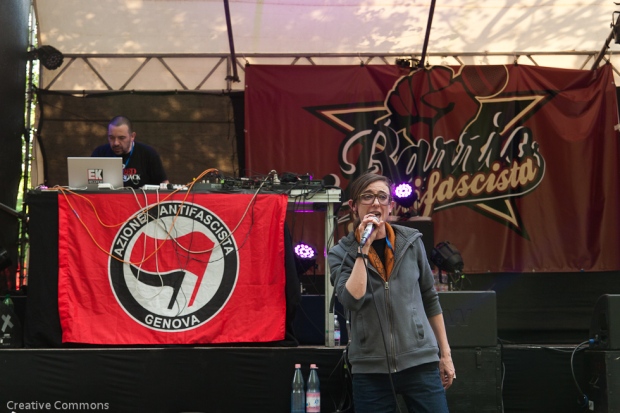 Welcome back to another weekly podcast of The Rebel Beat on CKUT – your weekly dose of revolutionary music and class war on the dance floor!

Our very special guests on the show this week are anarchist hip-hop duo Drowning Dog & Malatesta. This talented and lyrically hard-hitting group formed in San Francisco in 2005, and are now based in Berlin. They just released their new album “Black cat – best you can get!”, and we caught up with them to talk about everything from gentrification, anarchism, class consciousness, and hip hop.

We also dropped the latest single from M.I.A., borders, an intense tune looking at the ongoing refugee crisis, and we had a good quick discussion on the video for the song (linked below).

Since it was Thanksgiving in the U$A last week, we opened this podcast off with a set of anti-colonial tunes from mostly Indigenous artists. And we wrapped up the show by looking at the musical legacy of the late labour radical and IWW member Joe Hill. The 100th anniversary of his execution by the US government was on November 19th, and many radical musicians have been celebrating him as of late.

A Tribe Called Red – Burn your village to the ground

Interview with Drowning Dog and Malatesta

Harry McClintock – The preacher and the slave

Pete Seeger – Which side are you on?

The Weakerthans – Confessions of a futon revolutionist