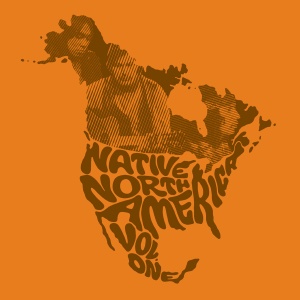 We’re very excited to bring you this week’s podcast of The Rebel Beat, which offers a special feature on the amazing “Native North America (Vol. 1)” which came out on Light in the Attic records last November. Light in the Attic has put out some amazing reissues over the years, but this one is a powerful reflection on older Native folk tunes which speak to issues of decolonization, spirituality, love, and rock n’ roll.

Largely unheard, criminally undocumented, but at their core, utterly revolutionary, the recordings of the diverse North American Aboriginal community will finally take their rightful place in our collective history in the form of NativeNorth America (Vol. 1): Aboriginal Folk, Rock, and Country 1966–1985. An anthology of music that was once near-extinct and off-the-grid is now available for all to hear, in what is, without a doubt, Light In The Attic’s most ambitious and historically significant project in the label’s 12-year journey.

We were very honoured to speak with both Kevin “Sipreano” Howes, the producer of this compilation, as well as Willy Mitchell, one of the amazing artists featured on the album. Both of those interviews you’ll hear on this podcast.

Plus a brand new stuff from Rebel Diaz and Dead Prez, Buffy Sainte-Marie, songs from Klee Benally, A Tribe Called Red, and more!

Hope you enjoy this week’s podcast! We’ll be back next week for our monthly collaboration with Submedia, plus an interview with the militant Indigenous hip-hop artist Ant Loc of Savage Fam.

Rebel Diaz feat. Dead Prez, Rakaa Iriscience – Which side are you on? REMIX

Savage Fam – Way of the drum

Willy Mitchell – Call of the moose

Klee Benally – A matter of action

The Class Assassins – The addiction

Willie Dunn – The ballad of Crowfoot