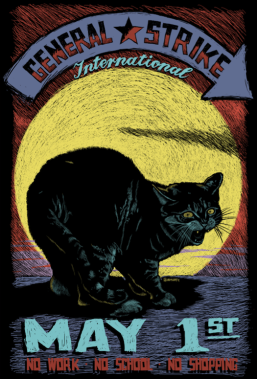 Oooohhh shit! It’s that time of year again! The trees are budding, birds are chirping, the people are rising, and Mayday is upon us. Every year, May 1st is celebrated in most parts of the world as International Workers’ Day. It’s a day to celebrate not only labour struggles, but all fights against oppression and ecocide. In many cities, there are Mayday protests and celebrations of all kinds, so wherever you are, find your nearest one, get out there in the streets, and STRIKE!

This week on the podcast, we welcome back our regular collaborator, co-conspirator, and friend, Frank of Submedia! As usual, Frank comes loaded with a wicked “fuck work” themed playlist of Mayday tunes, plus we hear an interview he did recently with Fannie and Brice from the Printemps 2015 committee in Montreal. This committee has been behind many of the amazing student strikes and actions in Quebec over the last few weeks, and they’re also gearing up for some pretty major Mayday stuff. Check ’em out!

Plus, in case you missed it, we did a special on Quebecois resistance music on Podcast 010 of The Rebel Beat.

Ah yes! And if you’re in or near Montreal, don’t miss The Rebel Beat launch party this Saturday May 2nd at l’Escogriffe (4467 St-Denis)! It’s got a lineup of amazing radical artists, and makes for your perfect post-Mayday party. See you on the dancefloor!

Steel Pulse – No justice no peace

Yasiin Bey – Where are we?

The Coup – 5 million ways to kill a CEO

Interview with Fannie and Brice from the Printemps 2015 Committee

United Steelworkers of Montreal – Rise up