Welcome back to our weekly podcast of The Rebel Beat, right here on the radical mothership CKUT Radio!

This week on the show, our special guest co-host is Dawn Paley, an author, independent journalist, and DJ extraordinaire. Dawn is based in Puebla, Mexico, and for years, her work has been focused on bringing forward the voices of those most impacted by capitalism, imperialism, and the drug war in Latin America. Last fall, she released her first book ever, Drug War Capitalism, on AK Press. 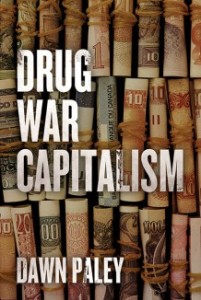 We checked in with Dawn about what’s going on in Mexico, her new book, and what music she’s been listening to lately. You can find lots of it in this podcast! Hopefully we’ll be checking in with Dawn more regularly, and bringing her on as a frequent co-host on the show. So if you enjoy the tunes, subscribe to our podcast, and keep checking back!

Plus we have some fresh tunes in here from Narcy, A Tribe Called Red, Downtown Boys, and Refused!